The Fillmore Archery club had two representatives in the NASP National tournament in Louisville, Kentucky this past weekend. On Friday night, Abby and Craig Swift both participated in the NASP Open International Bowhunters Organization 3D tournament. Craig shot a 169 and placed 995 out of 1021 archers in the middle school boys' division. Abby shot a 218 and placed 251 out of 527 archers in the elementary girls' division. Neither Craig nor Abby have ever shot in this type of tournament before, so their scores were a great representation of their archery ability. Approximately 5000 archers competed in this tournament. Because of their participation in the National tournament, both have qualified to compete in the World 3D challenge and Open tournament in Pennsylvania in August.

Abby then competed in the NASP Eastern Nationals Bullseye tournament on Saturday morning. She shot a 229, which is 11 points higher than her state appearance in March. She finished 619th out of 1,243 girls in the elementary division. Abby was able to score above the 50th percentile mark in each tournament. Well over 11,000 archers from 32 states competed in the Eastern National Bullseye tournament. Wonderful job on a great archery season. 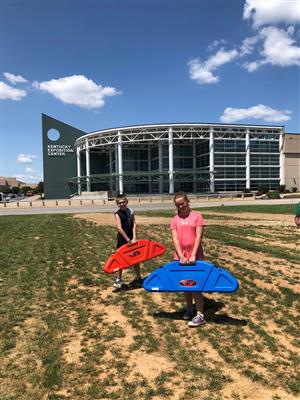