Class of 2021 Valedictorian and Salutatorian 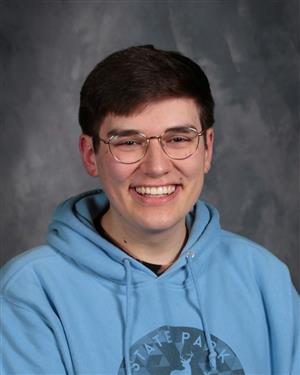 Fillmore Central School is pleased to announce that Kieran Kelley is the valedictorian and that Harley Miller is the salutatorian of the class of 2021.  Kieran is the son of Mary Kay and Bill Kelley.  Harley is the daughter of Michelle and Scot Miller.

Kieran leads the class with a 98.87 unweighted average. Kieran has taken advantage of the numerous college classes offered at Fillmore and will graduate with over 40 college credits. Kieran is a member of our National Honor Society.

In high school Kieran has been president of Student Council for two years. He has worked on the yearbook for four years and is the editor this year.   Kieran has participated in Scholastic Challenge and Masterminds for four years and was a league all-star in his junior year.  Kieran has also participated in track, choir, FROGS, and several drama productions. He has done the morning school announcements for three years. In the community Kieran volunteers at a local animal shelter, assists with blood drives, and has helped at a local food pantry.  Kieran was selected as the Bausch and Lomb Science Award winner, Standard Bearer, and the Globetrotter Award winner.

Kieran has been accepted at several colleges and is still deciding where he will attend next year. He is looking to major in either Political Science or Environmental Policy.

Harley earned the salutatorian honor with a 95.48 unweighted average.  Harley is a member of our National Honor Society.

Harley has been a very active member of our FFA, she served as treasurer for 2 years and currently serves as president.  Harley has also has been in Student Council for four years and currently serves as vice-president. She has been a member of the soccer, basketball, and softball teams for four years and volleyball for one year. She has also been a member of FROGS and Band. Harley was selected as a Standard Bearer and the DAR Good Citizen by the faculty. In the community Harley has worked with the local food pantry and Red Cross Blood Drives.

Harley plans to attend Otterbein College in Westerville, Ohio and major in zoo Science and Conservation.